Singapore, renowned as the gateway to Asia, is arguably the most popular stop-off point for travellers as they roam around the globe. While some unfortunate people only get to see Changi Airport during a brief stop over (which, admittedly, is rather nice as far as airports go..) we just knew we had to see more than that!

Welcome to our very first post on Wandercooks.com! Perhaps you’d like to find out a little more about us before you read on? 🙂

When planning our trip to Japan and beyond, a wonderful couple of friends offered to have us stay in their apartment and show us around.

Together we explored the eastern side of the island and just barely scratched the surface during a week-long stay. You could (and probably should!) spend a lot longer than that exploring the many things to do, see and most importantly eat in this multicultural island country.

We learnt a lot about Singaporean flavours during our wanders, some of which we loved, others not as much, but this post will focus mainly on local-style hawker food rather than that which you would find in more formal restaurants. Sit back, grab a cuppa and read on to find out just what your taste buds have been missing out on!

Sit back, grab a cuppa and read on to find out just what your taste buds have been missing out on!

If you want to truly eat your way through Singapore then you can’t go past a meal at a local hawker centre.

Whether you’re out and about for breakfast, lunch or dinner, these places can be found everywhere throughout Singapore. While they’re usually packed with people, you’ll likely always find a place to sit if you ask nicely; Singaporeans are happy to share their tables.

What’s really incredible though is the price – a main meal and a drink should cost you less than $4.00 SGD, and possibly even less depending on what you order. 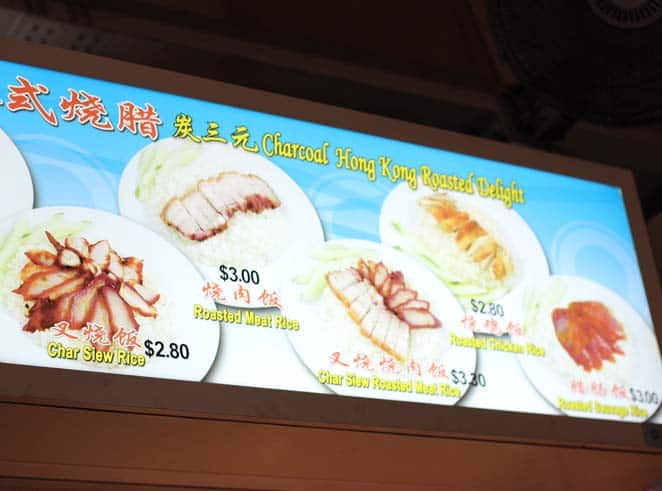 Don’t know what to try? Have a look at the picture signs above every hawker stall to help you decide.

Whether you feel like Malay, Chinese or a fusion somewhere in between, you’ll find rows upon rows of small food and drink stalls to choose from.

If you don’t happen to be with a local like we were, or you’re not sure what to try, you can usually work out which stall has the best food by looking for the one with the biggest lineup. 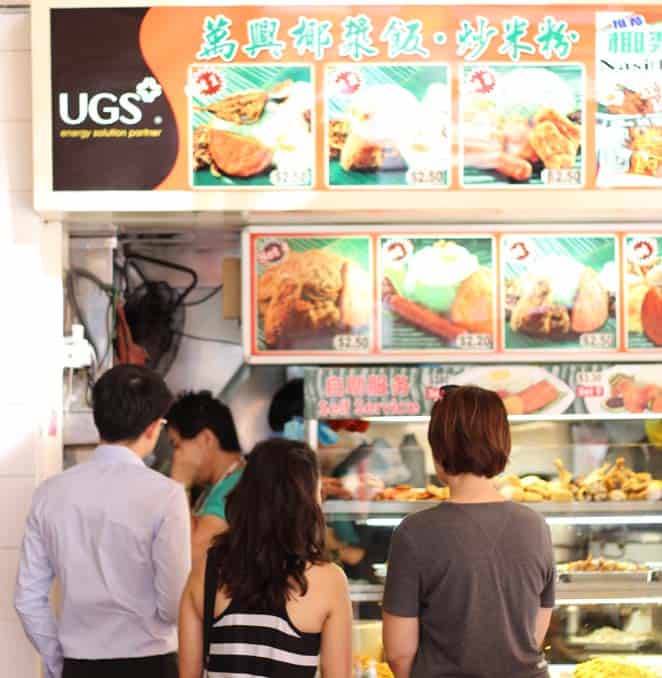 Even with a long lineup you shouldn’t have to wait long!

One of the best parts about eating at a hawker centre, particularly as a (quite obviously) non-resident, is talking with the stall-owners about their food. They are incredibly passionate about their food, with many stalls having been open since the 1960’s or even earlier.

The people that we spoke to were happy to talk to us about their food and so proud when we asked to take some photos, even if we did need help with some English translation (kudos to our friend Kat!).

One stall owner in the Bedok centre served us the best tasting char siew pork we have ever eaten, which he makes from scratch every morning, starting at 3 am so that it’s ready in time for the breakfast rush.

Using street English picked up over the many years of running his stall, he was so happy to speak with us and happy that we understood his limited English, not to mention how much we loved the char siew. 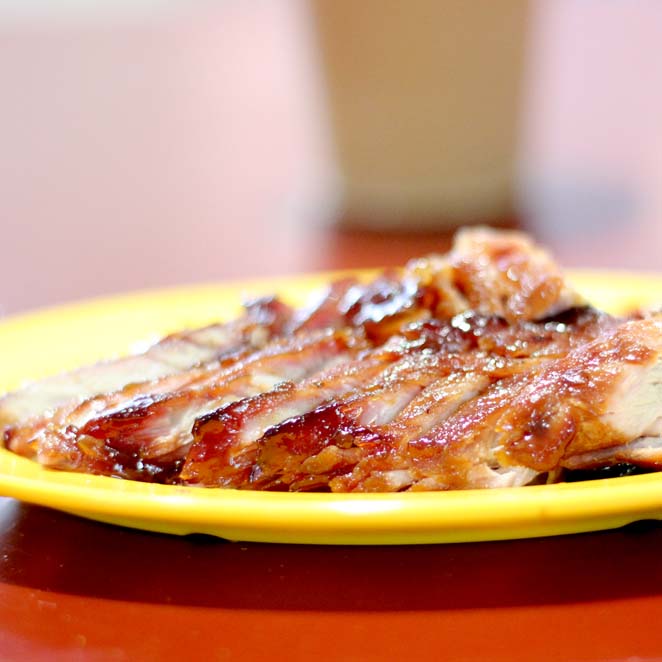 Pork char siew served up hot and delicious. One of our favourite meals of the trip.

A Full Week of Food, Food and More Food

Throughout the week we tried lots of local dishes at hawker centres and it was great fun exploring our way through Singapore’s multicultural cuisine.

One of our favourite dishes from a local eatery is called mee tai mak. It’s a clear soup with short tapered noodles (commonly known as rats tail noodles in Singapore due to their unique shape) and small white fish balls.

These massive bowls of soup are filling, healthy and very tasty, and you can charge them up with as much heat as you like from the accompanying dish of chillies.

This is the breakfast to have amongst the Malay population and one of the first meals we tried in Singapore.

The sambal is simply delish mixed with the rice and chicken or fish, while the anchovies and peanuts on the side add just the crunch and saltiness needed to round out the dish. Traditionally it’s served wrapped in a banana leaf but this seems to be becoming rarer and rarer these days. 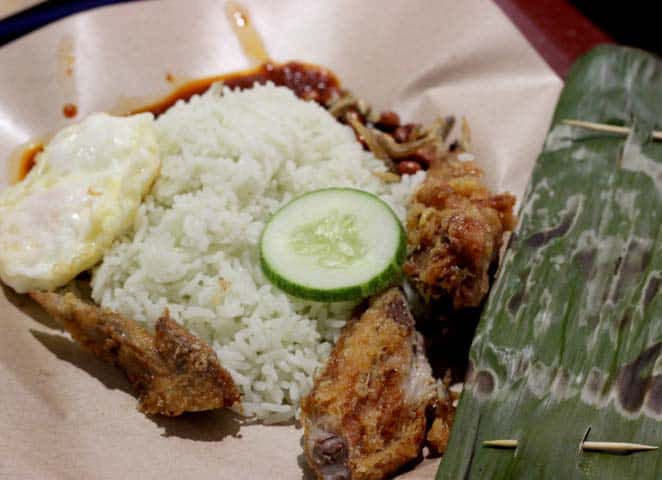 An optional side dish with nasi lemak or other meals is otak-otak, which is essentially a grilled fish cake made from fish paste, tapioca starch and various spices.

Interestingly enough, when looking into this dish a bit further we found out that otak literally means brains in Bahasa Indonesia/Malay! That’s because of it’s soft, squishy texture and the fact that in Indonesia it’s usually a whitish-grey colour, although in Singapore it’s a reddish-brown colour due to the addition of spices, chilli and curry powder.

While this one didn’t rate so highly for our personal tastes it’s so well loved in Singapore that it’s commonly bought in bulk to take home. However you feel about, otak-otak is definitely one to try when you stop off in Singapore. 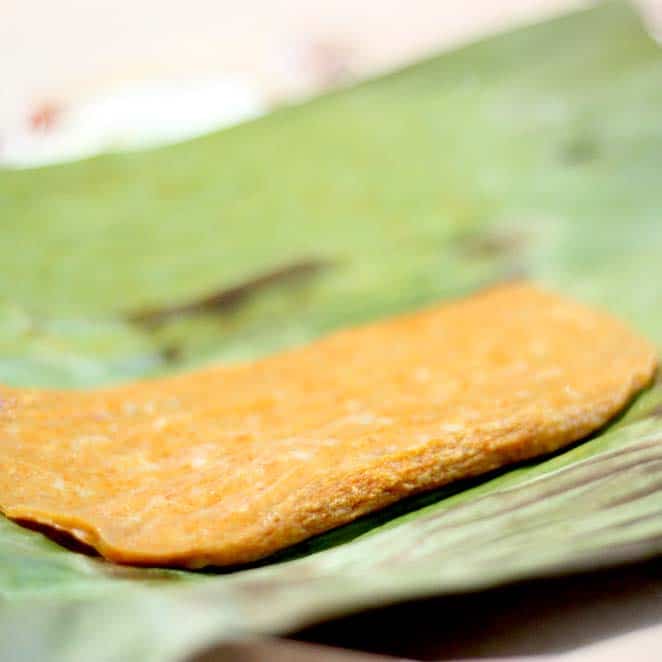 Otak-otak is one for those who love their fish.

Of course we could not leave Singapore without sampling a delicious bowl of laksa. This spicy noodle soup dish comes from the

This spicy noodle soup dish comes from the Peranakan culture which is a mix of Chinese and Malay heritage, but there are many variations available depending on where you are. Using laksa noodles versus vermicelli noodles, prawns and mackerel versus chicken, tamarind versus coconut etc; all will affect the overall flavour. We tried the Curry Laksa version which is made with coconut milk giving the soup a creamier texture, and Penang Laksa which has a sour taste due to the use of tamarind. Both were delicious in their own ways, equally full of intense heat and flavour.

We tried the Curry Laksa version which is made with coconut milk giving the soup a creamier texture, and Penang Laksa which has a sour taste due to the use of tamarind. Both were delicious in their own ways, equally full of intense heat and flavour. 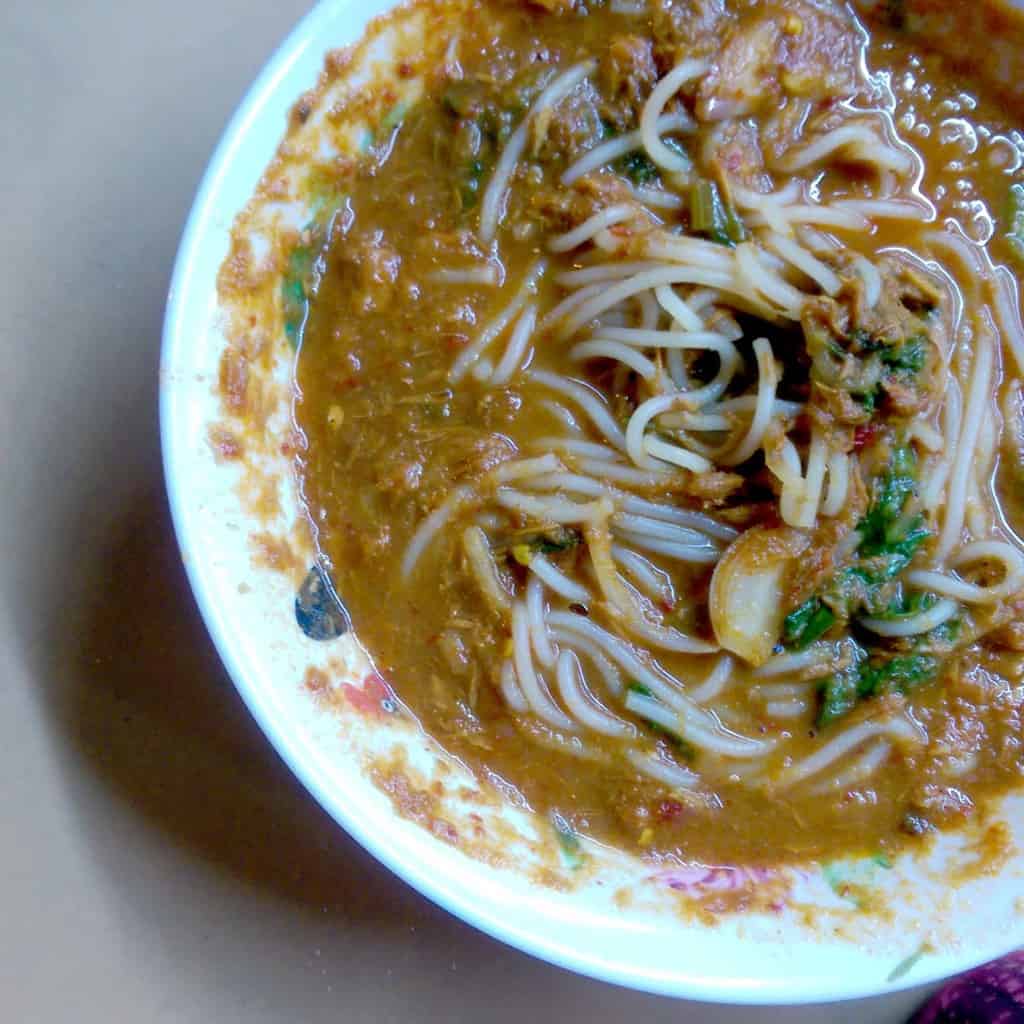 Penang style laksa has a sour flavour compared to it’s coconut-based counterpart, due to the use of tamarind.

One of the most interesting ingredients we came across during our stay was the petai bean (scientific name: parkia speciosa).

Also known as bitter beans or even stink beans due to their.. unique aroma, they’re found everywhere through South East Asia and despite the name (and smell) they are actually quite tasty.

They are great when stir-fried in a mix of strong flavours such as garlic and sambal paste as they were when we tried them. The texture is crunchy yet almost rubbery, somewhere between a peanut and pickled daikon or carrot. 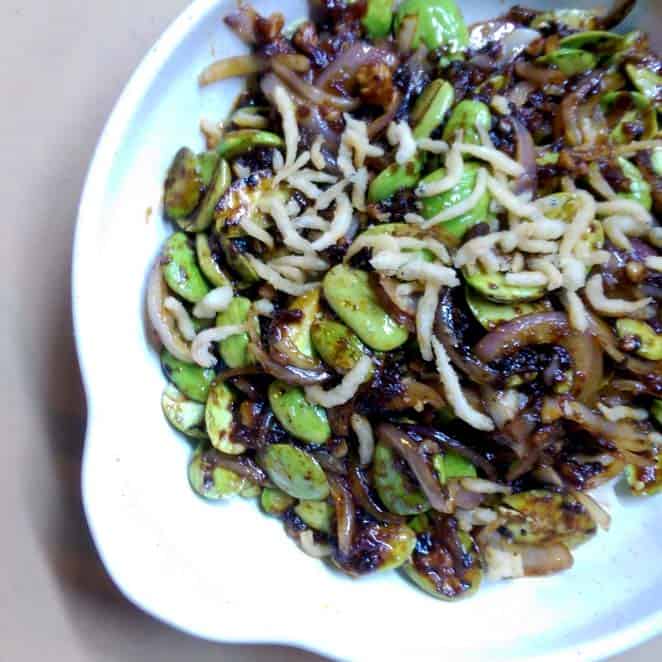 Petai beans with spanish onion and white bait made for a surprisingly delicious stir-fry.

Crossing over now to a completely different texture is the Singapore congee. Sometimes known as rice porridge, but usually served with a savoury flavour, it’s found everywhere throughout Singapore and is a

Sometimes known as rice porridge, but usually served with a savoury flavour, it’s found everywhere throughout Singapore and is a much-loved food for breakfast, lunch or dinner.

We had never even thought to try congee before arriving in Singapore, but from the first taste, this one was a winner for us.

Regular ‘additions’ include pork, sliced fish, and even a raw egg which is usually cracked into the bowl first before the hot congee is poured over the top to slightly cook the egg, while the overall dish is then finished off with green onions and/or fried shallots. It made for a nice contrast to some of the spicier dishes we tried during our stay. 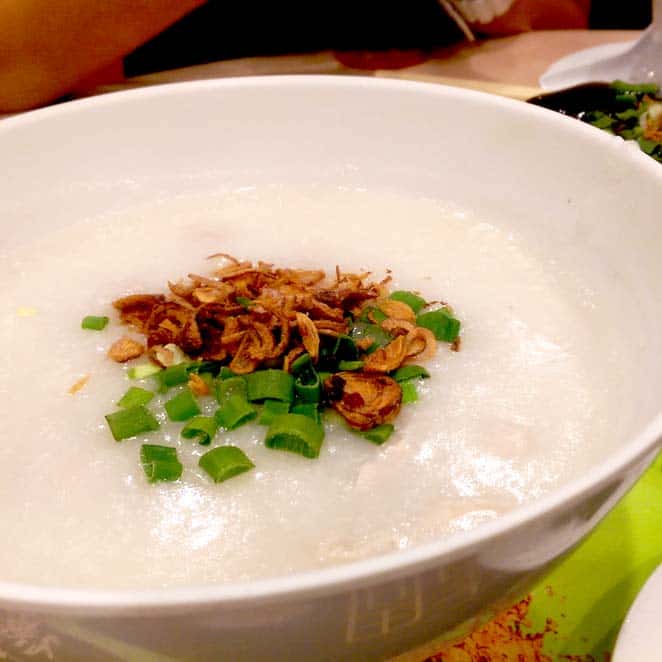 Congee is traditionally a breakfast dish but we like it at any time of the day.

Now when we came across a shop with marmite chicken on the menu we knew we just had to give it a go.

Our friends had previously ordered the dish as a joke fully expecting not to like it, but it’s actually really good!

Similar in texture to teriyaki chicken, this is a great dish to order along with a few other sides to share among friends.

We created our very own Vegemite Chicken in honor of this dish if you’d like to check it out! 🙂 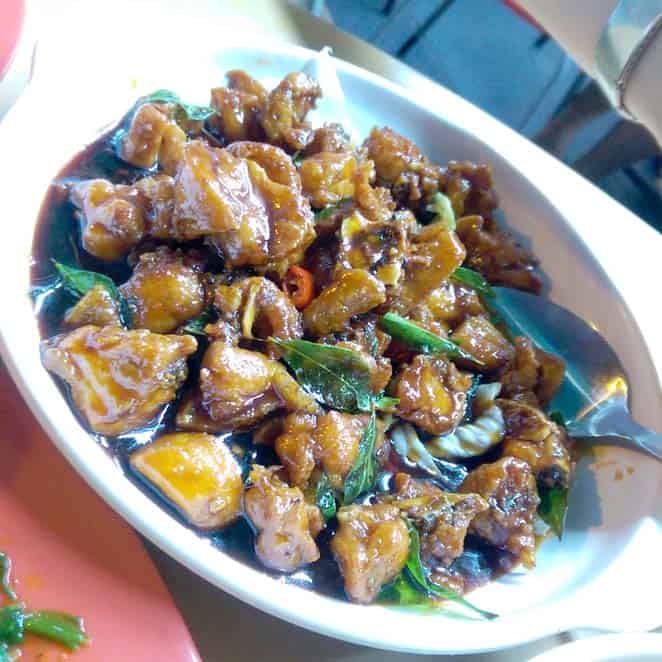 Marmite chicken was ordered as a joke, but it’s actually quite good!

Char kway teow is one dish that’s available in many places back home in Australia, but somehow the flavour is never quite right.

They sure know how to cook up a kway teow storm in Singapore using plenty of eggs, noodles and of course stir-fried rice cake strips.

We couldn’t get enough of this dish! 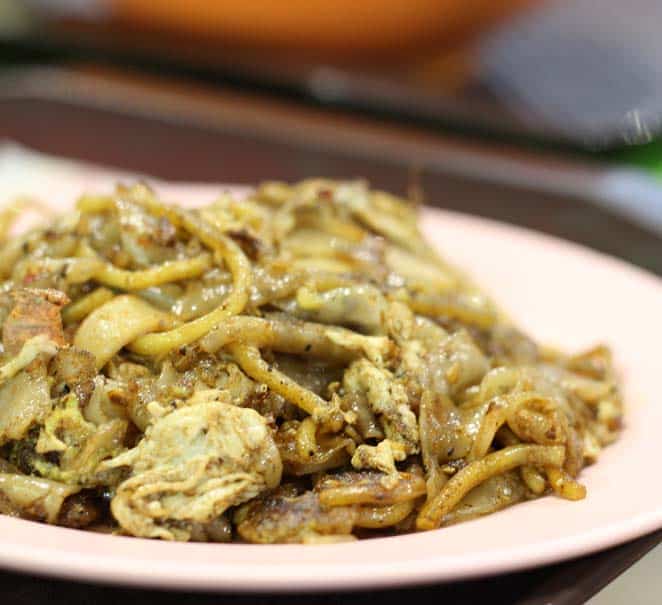 Char kway teow, one of our favourites, and fun to eat with chopsticks!

Accompanying our char kway teow we also ordered a plate of carrot cake – but for those reading this back home, it’s not what you’re thinking!

This dish consists of radish cake (usually made with shredded white daikon, rice flour and water) which is then stir-fried with eggs, preserved radish, diced garlic and seasonings.

Variations include adding bean sprouts, dark soy sauce and sweet molasses to give it a more intense flavour.

This is a well-loved comfort food which is eaten at almost any time of the day, as a main or as a side to other dishes… 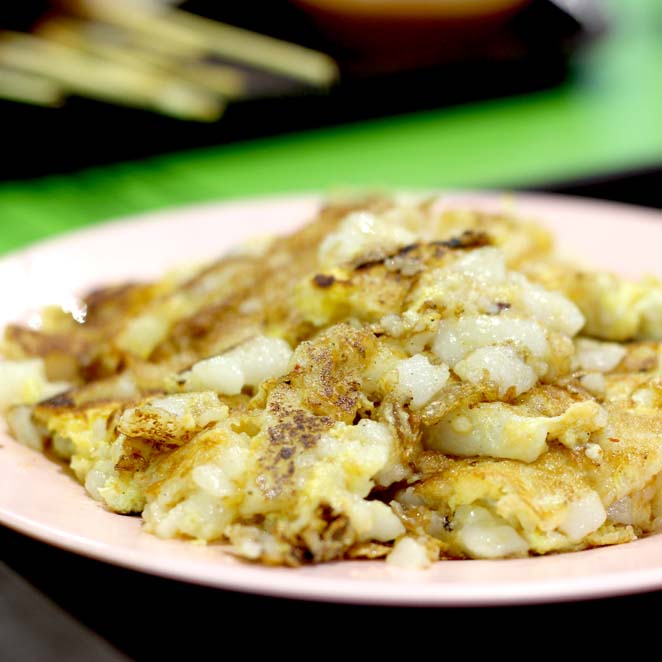 The most delicious carrot cake in the world and not a carrot in sight.

… such as a platter of satays!

One night we took turns grabbing a dish or two from various stalls in the hawker centre til we had created a feast to share.

These satays were grilled to perfection and absolutely delicious when dipped in the accompanying sauce. 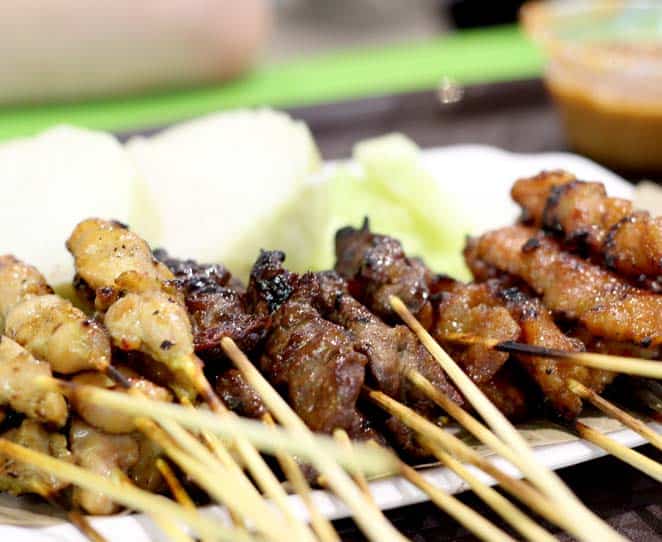 Another Teh Tarik Please!

We decided to include this popular beverage even though it’s not technically food because it is everywhere in Singapore and is so tasty (and surprisingly refreshing) that we had it with almost every meal.

This black tea and condensed milk beverage comes from the Malaysian aspect of the culture and can be served up hot or cold depending on your preference. With the regular 33 degree heat and high humidity we usually stuck to the iced teh tarik, however despite this one of our friends always opted for the hot version wherever we went.

If you want to have a go at making this in your own home, just check out our Ridiculously Fun Malaysian Teh Tarik recipe. 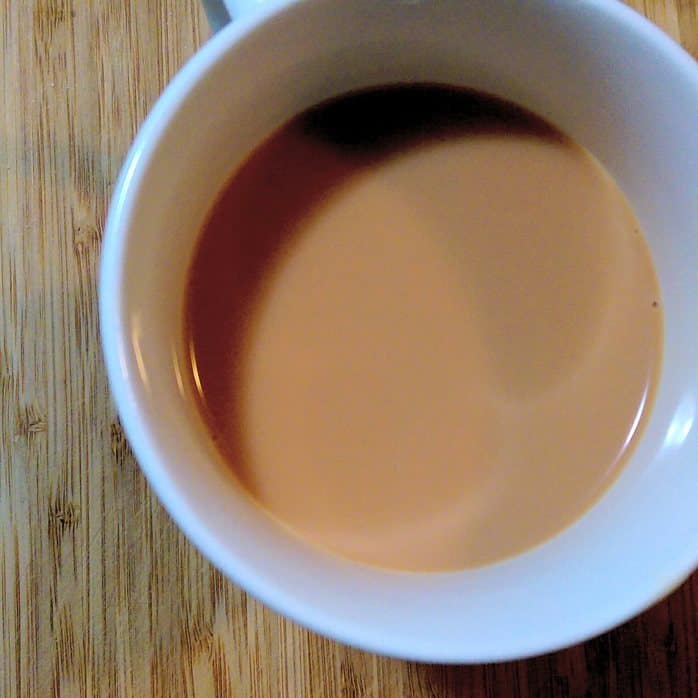 As One Wander Ends Another Begins

Looking back we managed to eat a lot of different foods in our short stay in Singapore.

What a culinary adventure we had!

Before long it was time to pack our bags and head to the airport for our flight to Japan.

Have you ever been to Singapore? If so, what were your favourite dishes? Let us know what we should try next time!

Now after all this writing and thinking about all this food it’s surely time to eat! 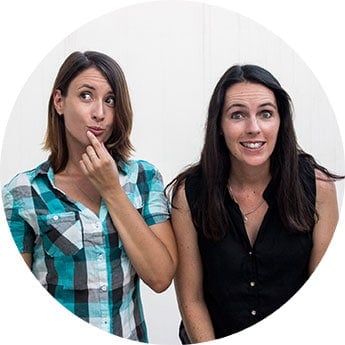 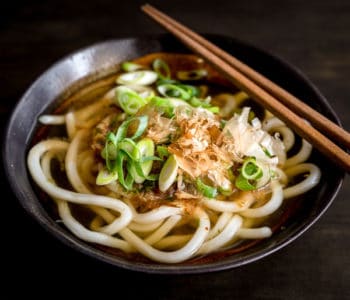 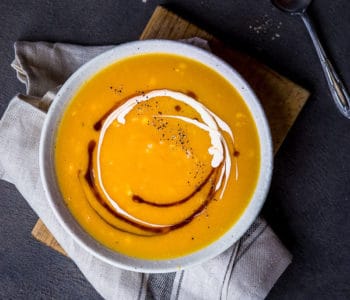 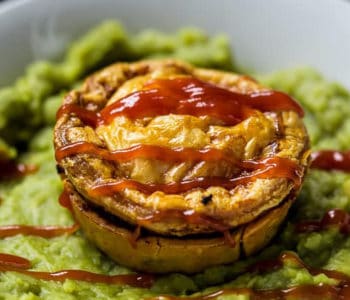 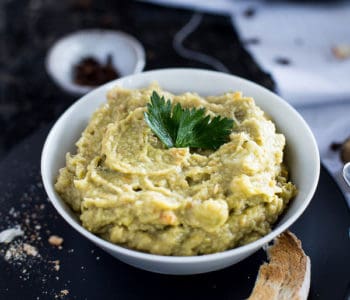 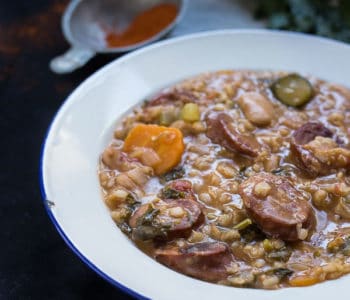 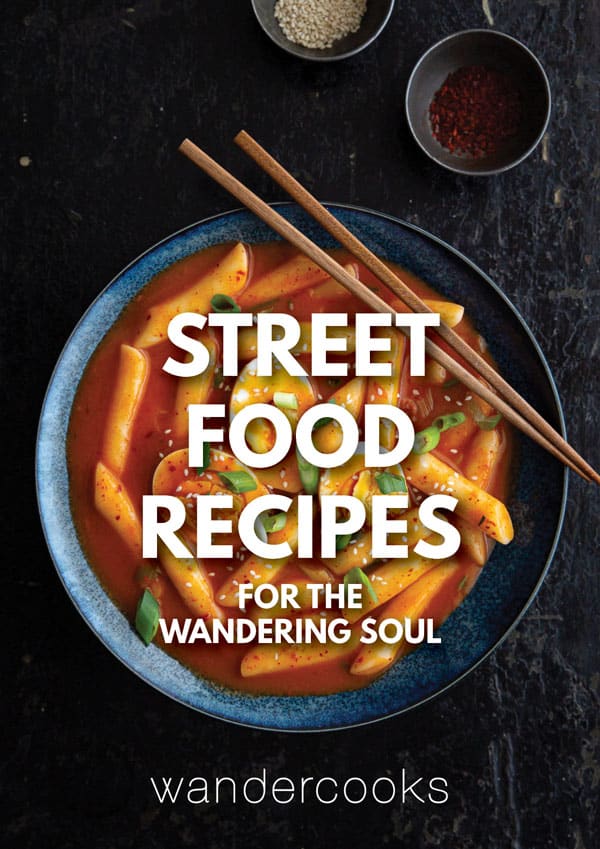 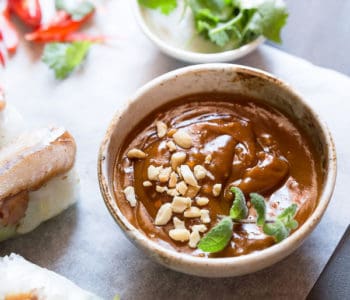 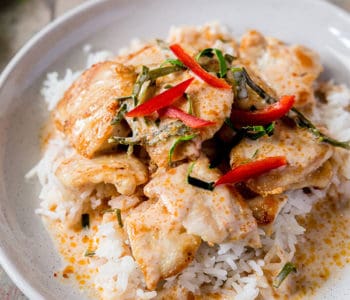 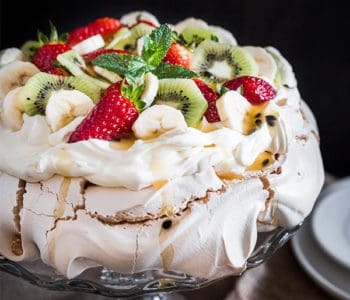 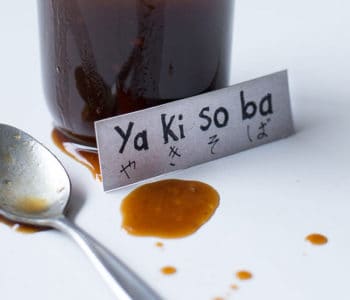 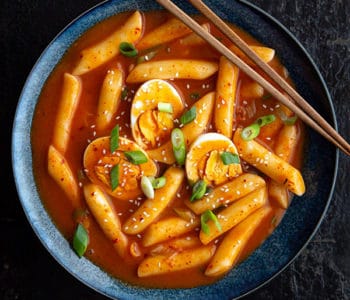